A walk around the Brindley Place area of Birmingham to discover the location of the lost canal basins.  Andy Tidy explores Gas Street Basin, and the remains of Old Wharf, Bar Lock, Cambrian Wharf, Gibsons Arm, and the Newhall Branch.

Is the legendary heart of the Birmingham canals. 250 years ago, in 1769 it was the terminus of the first Birmingham canal from Newhall. Gas Street Basin was a very industrial area, the canals served the local industry – that’s why they were built, at considerable cost and risk (see 250 Years BCN).

Several factories around Gas Street Basin had their own canal arms. The snippet below shows the Gas Street Basin in the legendary IWA “Blue Book” Birmingham Canal Navigations, and is reproduced with the kind permission of the IWA: 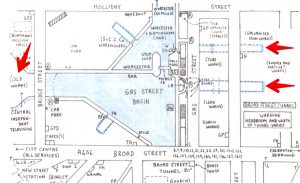 Old Wharf, the red arrow on the left, lead to two canal arms. The two arrows on the right show two other arms Andy visits. They served, as we can see, a range of industries. There are tube works, galvanised iron works, sword and “matchet” (what is a matchet?) works, and lead works. 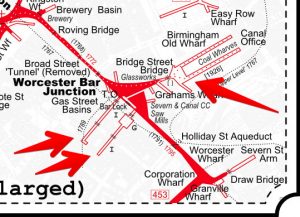 Gas Street Basin, from the Historic Map of the Birmingham Canals

The snippet below shows the area of the Newhall Branch and the Gibson Branch in the legendary IWA “Blue Book” Birmingham Canal Navigations, and is reproduced with the kind permission of the IWA: 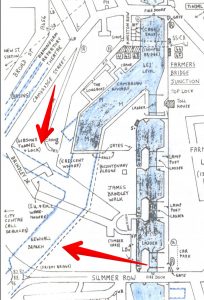 Newhall- and Gibson Branch, scan from the IWA Blue Book

Both branches seem to make the best use of the small plateau around Gas Street Basin. The Newhall Branch even had a tunnel and a single lock! It connected to Baskerville Basin, the Easy Row Wharf, and two arms serving local industry. There’s not much left, but Andy traces the remains, and put them into perspective in the 21st century Birmingham.

The same area, shown on Richard Dean’s Historical Map of the Birmingham Canals (reproduced with the kind permission of Richard Dean):

BCN Newhall Branch and Gibsons Arm, from the Historical Map of the Birmingham Canals