The original Birmingham Canal was a “contour canal”, following the twisting and turning contours of the land. This first canal was such a success that a “through route” was needed to cope with the traffic. This through route was Telford’s New Main Line. It cut right through, crossing the old canal at several places, and turning the remaining parts of the old canals into loops.

These loops were important, they still served the local industry. Many factories had their own canal arms for loading and unloading.

Andy Tidy starts this third part of the series at the Icknield Port Loop.

The area is now part of a huge redevelopment project. The crumbling red brick factories around the loop may have already gone by the time you read this. The planned houses might look nicer, but another part of the BCN’s industrial past will be gone forever. 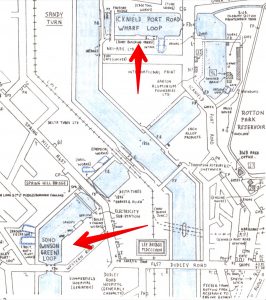 The next loop, after crossing the New Main Line, coming from Icknield Port Loop, is the Soho Loop. Another name for it is Winson Green Loop, and it’s right next to the probably better known Winson Green Prison.

The Soho Loop on Google Maps

The Soho Loop leads to Hockley Port Junction and the Soho Branch. Another, older name is Birmingham Heath Branch. It is now a small branch with residential moorings, but it used to be a hive of activity. Matthew Bolton‘s huge Soho Factory (Soho Foundry), which pioneered mass manufacturing, was served by the canal. The IWA’s Blue Book describes it as a group of workshops where craftsmen produced jewellery and silverware in high quality. In later years, a railway interchange basin was built. The stables still stand, and are used by a youth centre.

From the IWA Blue Book, with kind permission by the IWA:

The Soho Loop leads to the Birmingham Heath Branch, opened in 1801 to Matthew Bolton’s Soho Works. This was a group of workshops where craftsmen produced jewellery and silverware of high quality. The Works was demolished in 1863 and the Branch now only runs as far as Hockley Port, where the GWR interchange basins have been converted into an adventure centre for local youths. There are three striking murals, two showing the port “then and now”. The original stables still stand and are used for the centre’s activities – a farm is housed in one end of the blocks on the right. Ample moorings are provided for visitors but it is perhaps best to use those in the first basin on the right, which is fenced off from the rest of the centre. The attractive Victorian terraced houses surrounding the basin are being systematically restored, and the whole site is an excellent example of the imaginative renewal of an inner city area.

The Cape Arm is, unfortunately, one of the lost arms, although parts of it are still in water.

The Cape Arm on Google Maps

WORK IN PROGRESS – more to come about the Cape Arm! 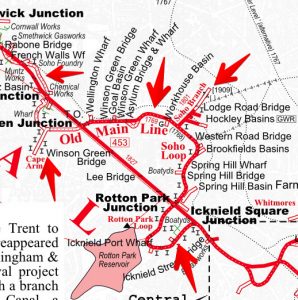 From the IWA Blue Book, with kind permission by the IWA:

Another loop ran past Soho Foundry, opened in 1796 by Boulton & Watt to manufacture pumping and rotary steam engines. These engines had been assembled at Soho Works from parts manufactured elsewhere since 1755 and the Birmingham Canal Company had been a regular customer. Eventually they purchased 19 of the first 54 pumping engines built. In 1802 the first gas lights ever to be seen in public illuminated the front of the foundry. These were produced by William Murdock, who had also built a model locomotive driven by steam. Gas lighting equipment soon became an important product of the foundry but the partners missed the opportunity of developing Murdock’s locomotive.

The firm left the foundry bin 1850 and was acquired in 1895 by W & T Avery Limited, manufacturer of scales and weighing machines.

Some of the original workmen’s cottages still stand just inside the entrance and there is a small museum. Visits can be arranged with the curator.

Unfortunately, this website tells us that the museum, as of 2015, was defunct.

Does anyone know if it’s open again?

Are there any photos of the “workmen’s cottages” that could be shown here? 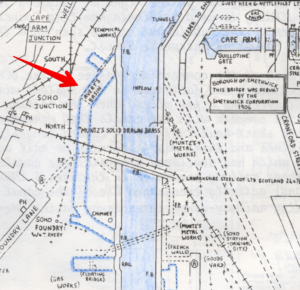 The Avery Arm – Scan from the IWA Blue Book

From “Birmingham and the Black Country’s Canalside Industries”, with kind permission by the author, Ray Shill:

The making of scales and weighing machines was the specialty of William and Thomas Avery ay the Mill Lane Works, Digbeth. Many of the parts used in weighing machines, as well as the weights, were cast iron produced in a foundry. W.. & T. Avery had the Atlas Foundry, in Charles Street, West Bromwich that was linked by a canal basin with the Ryders Green Locks. Followinf the purchase by Avery of the Soho Foundry (formerly James Watt & Co.) much of the work was transferred to Soho, where coal was delivered by boat into the arm that served the Soho Foundry. Joseph and Jesse Siddons of the Top Hill Foundry also made weighing machines as part of a range of other items, which included general malleable iron foundry and hollow ware.