The Birmingham Canal Navigations Society came about not from a ‘Big Bang’ theory but more like a creeping inevitability. It all began with the Government publishing a White Paper on the canals in 1967. Barbara Castle was Minister of Transport and we all expected Labour to champion the waterways cause. Most people were happy with the White Paper. BCNites were not. At a stroke, there would be no support for the Wyrley, Tame Valley, the Walsall. All we had left was the New Main Line and the Fazeley. The ‘remainder’ were just that, the remainder.

In 1967, the only canal groups were the Dudley Tunnel, Staffs & Worcester, Wolverhampton Boat Club and IWA Midlands branch. All expressed an interest in doing something about the BCN but all had their own agendas and the BCN were not at the centre of the interests.

It was at the 1968 Staffs & Worcester Canal Society AGM I sat next to Phil Clark. Who asked me what the S&WCS policy was regarding the BCN. ‘How did I know?’ So he asked the question from the floor. The answer was less than convincing although there were several people that showed genuine concern. 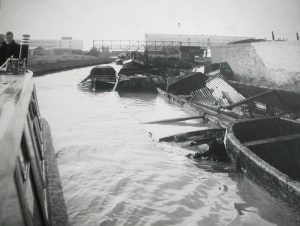 Maybe a bit of background about Phil would be helpful at this point. Phil lived in Lichfield and was a teacher at Willenhall Comprehensive. He organised canal boat trips around the BCN using Malcolm Braine and, I think, Dennis Cooper. I met Phil on one of the S&WCS trips around Netherton and Dudley Canals and became instant friends. He was interested in the Ogley locks and the Wyrley in particular. He didn’t have a boat but was a keen canal walker.

After the S&WCS meeting we hung around just wondering what to do. I suggested we have a  meeting with other people having our concerns. The ‘gang of five’ came together, namely, myself, Phil, Peter Freakley, Stan Thomas and Norma Drayton (nee Preator). There were no minutes or agenda it was just ‘What do we do?’ We all put £5 into a kitty to cover expenses and there it started. 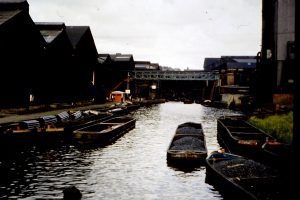 A meeting was arranged at the New Inn, Park Street, Walsall. Walsall was selected as being the centre, geographically, of the BCN. IWA had meetings in Birmingham; S&WCS had meetings in Wolverhampton, so Walsall it was and it was cheap! We put notices in Libraries and sent out letters and canvassed whoever we could think of. We had a real mixed bag of replies mainly from the canal organisations, all of whom, strongly objected to the meeting taking place at all. I think it was all summed up in a letter received from the Chairman of the Midlands IWA who was Leicester based. In the letter he said that IWA was supporting the White Paper and as he had got stuck on a mattress in Garrison Locks, the BCN was not on his cruising list. We couldn’t believe this gaff. Garrison Locks are on the Grand Union not the BCN! So, we went off to Walsall for the public meeting wondering if anybody would turn up. And turn up they did!

The upstairs back room of the New Inn was packed to bulging. There was no minutes or notes or anything to record the meeting which is a pity. Phil took the meeting and there was unbelievable enthusiasm. The outcome was to give the name BCN Society – just that –  Not Birmingham Canal Navigation Society but just BCN Society. It would be given three months and a General Meeting was set for November 2008. In the mean time, Phil would be chairman, Norma secretary, Stan would organise a workparty, Peter and I would sort out a cruise, Phil would organise a canal walk and there would be monthly talks on the BCN arranged through Norma. Money poured into the kitty and I became treasurer for the three months and later set up a bank account with myself, Norma and Phil being signatories.

I can’t remember the exact details but in the first three months, we did partake in a dig. We had problems of no insurance etc etc but I called Graham Palmer of Navvies Notebook notoriety and asked for a lock at Operation Ashton. We were given lock 11. Two vans turned up. Stan and his navvies, Charlie Aldrick with the remainder. So, the first work party was Ashton. There was a lovely picture of Peter Freakley driving a dumper truck still wearing his battered boating trilby! This appeared in Waterways World. Did we do it? You bet your life we did. The BCN gang had arrived. This was followed up with a dig at Welshpool and this part of the BCN activities was established. Later, Stan stepped down and Graham Turner helped out and thereafter everything was better documented. 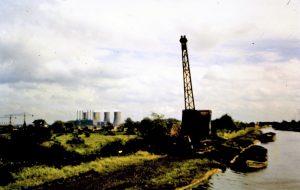 We had a cruise around the Ridgeacre Branch, there were a couple of meetings, that sadly, my memory fails me, we also had a walk down the ‘Quiet Half Hour’. That was from Farmers Bridge to Warwick bar and back through Aston Locks. Before the three months were up we managed to get a Roneo printer and armed with a few stencil sheets, Boundary Post was started. Not the glossy magazine you now get but just a few Roneo sheets stapled together. The early copies of Boundary Post were lodged in the Reference Library in Birmingham. Norma tells me that she still has the Roneo, some stencils and some ink.

The three months passed and at the General Meeting Phil said we wanted to step down as being Chairman and I was elected and managed almost two years before work took me off to Bedford.

A real committee was put together and became better organised, well, almost. We had the first Rally in May 1969 at Birchills. About a dozen boats turned up to a very weedy canal. The length between Birchills Junction and the turn to the top of the locks was almost impassible. So, most of the weekend, in lovely weather, was trying to clear a passage. George Styles was editor of Boundary Post at that time and was keen to have a viking type long boat. He managed to get his hands on a Joey and spent two weeks before the rally looking for dustbin lids to mount on the side of the boat. We never actually saw George or the boat at the rally. He took on the task of getting a hog roast to the rally. Unfortunately, he loaded bricks, charcoal, spit and pig on to his pontoon and sent his mate on his way from Selly Oak. This ‘mate’ had never been on the canal before and asked in Gas Street how do you get to Walsall. They sent him round the loops as there was a campaign at the time to keep the loops open. He eventually arrived at Tipton 3 but nobody told him about locks! He waited and waited and waited. A couple of boats came down and then somebody went up. He turned round and went back to Selly Oak. The hog roast turned up at the IWA National Rally at Farmers Bridge a month or so later.

Having just read the 181 edition of Boundary Post, I am delighted to see that all the elements of canal activity are still being continued and I wish you all well. Since the BCNS broke the ‘establishment’ hold on canals, Hawne Basin guys are active, Norton Canes is still a working yard, Ogley locks are on the agenda for restoration,  Hockley Port, Birmingham and Worcester CS, T & M CS, Shropshire CS have all stepped up to the mark to make sure that all canals have their champions. I am pleased that my two pennuth had a small influence.

People who the Society needs to thank other than the original ‘Gang of Five’  not already mentioned include, in no particular order than I can remember them are John Phillips, Keith Eley, Barry McGowen, Dennis Moore, Robin Draycott, Lynette Milward (nee Parker), Alan Ledbury and Betty and Eric Fowkes, of course. Non committee members include Peter White, Paul, Roger and Steph Lorenz, Bob May, John Hill, George Bunting, Selwyn and Nancy Jordan, Michael Miles, Peggy Smith, David Wilkinson, Len Wilson, Tom Foster, Joe Leonard, Pete Smith, Ken Keay, Vivien Bird, Alan ‘Caggy’ Stevens, Edward Paget-Tomlinson  – sounds like the end of an award ceremony. If I have left  you off the list , write in with your rude comments. If this appears I did this all by myself  not so. Without these guys, – the BCNS would not be what it is today. We all owe them a debt of gratitude. The really good news is that we still have the majority of the BCN. I am disappointed that we ‘lost’ the Toll End Communication, Tipton Green Locks and the Hednesford Basins. You can’t have everything but you can always wish.