The Birmingham Canal Navigations built, managed, and provided the waterways, a seriously expensive business. They financed the network by charging tolls for boats using the canals, like the M6 Toll, the Dartford Crossing, or the Humber Bridge.

The toll for using their canals was based on the weight of the cargo, and also the type of cargo being carried. The various acts of Parliament authorised the BCN to raise the tolls and the rates that could be charged.

When a boat was loaded, the master would be provided with consignment documents giving details of the load and type of cargo and its destination. In theory these could have been used for calculating the toll, and it is likely that initially this may have been the method used, although boats could be unloaded and the cargo weighed if the canal company insisted.

However, a system like this was open to abuse and fraud, and in 1835 the BCN obtained powers to gauge boats. An indexing station was provided on the new island line at Smethwick. This is the island that still survives, adjacent to the Engine Arm aqueduct. 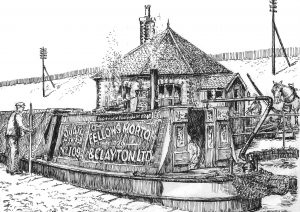 In 1872, in order to ensure all boats were gauged, and to provide an additional location where this could be carried out, a further station was provided at Tipton, adjacent to Factory top lock. At that time a new register of boats was started. This is the system that carried on until gauging and toll collection was abandoned in 1959. 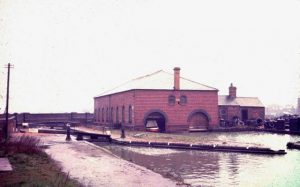 Tipton Gauging Station when still in use

The gauge was calculated by filling the boat with one ton weights and measuring the free board or dry inches’. These measurements were taken at four places and an average calculated. Each boat was then fixed with two gauging plates, usually one each side inside the fore end and stern.

Four smaller plates where fixed to the gun-whale where the gauge had been taken. A register entry was then completed for each boat. 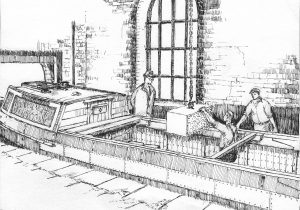 Loading 1-ton weights into a narrowboat at an indexing station. Drawing by Edward Paget-Tomlinson

To oversee the system, a series of Toll Offices where provided, where the boats could be checked. Under the system, established in 1872, each office was provided with a set of registers from the details compiled by the gauging station and against which the toll clerk could ‘gauge’ the boat and calculate the load from the measurements. 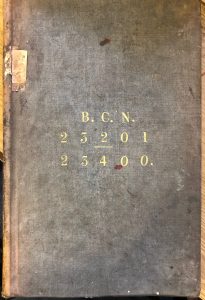 The cost of the toll was calculated based on the distance, weight of load and type of cargo and toll ticket was then issued at the first office that the boat passed and this was checked at subsequent offices along the route. Tolls were collected in cash or by account. 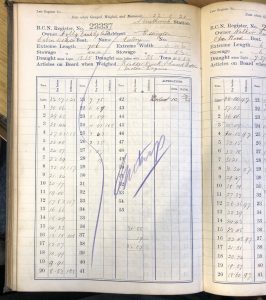 The boats carried two plates with a unique BCN registration numbers. They were usually riveted on the inside, at the bow and stern ends, and on diagonal sides, so one of them would be visible from either side of the boat. 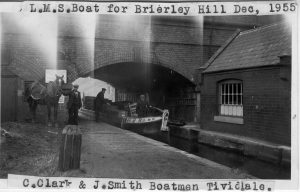 Every time a loaded boat passed a toll station, the weight of the load was calculated, based on the measured draught, and the information about the draught of an empty boat. The results were entered into big books like the one shown here. 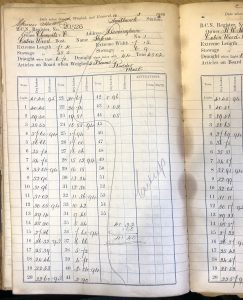 Each register sheet follows the same layout and records the same information. In the case of the boat with the gauging number 20526, this was owned by Elements & Co. based in Birmingham. The boat was gauged at Smethwick on the 10th March 1908 and carried the name HELENA. It was No.1 in the Element fleet, although maybe not their first boat.

HELENA is described as a cabin wood boat, that is it has a wooden hull and a cabin. Although, in this case, no doubt a short BCN style cabin, rather than the larger cabins on the long distance trading boats. The alternative descriptions would be "open iron", "open wood" or "cabin iron". "Open" in that it has no cabin, and iron being the material used for the hull. Later, when motor boats came into use, the term "motor" was added to the description.

The overall length of the boat was 71'4", with a beam of 7'1 1/2". The internal dimensions of the hold was 58'5", with a width of 6'9". Deducting the hold length from the overall length can give a good indication of the type of cabin on the boat.

Whilst the boat was empty when gauged, it did have 5 beams, rudder and mast aboard. If these were missing, when the boat was in traffic it, would affect the gauge. Often other items are recorded.

The table then shows the free board for each one ton weight increment. It was against these that the toll office clerk was able to calculate the load. It is likely that the heavier weights in the table were calculated rather than from actual measurement.

Whilst the BCN kept registers for all boats, they would also supply a copy of an individual gauging register to boat owners for a fee."

A BCNS member has transcribed all the information from those books into the database below. The entry for HELENA, mentioned above, is

The database can be searched by boat number, boat name, boat owner, and year.

The table by clicking on any of the headers. To revert the sort order, click on the same header again.