Have you ever handled a 70 foot historic narrow boat towing a butty?   If not, would you like to learn the necessary skills?

Atlas & Malus are two 1930’s work boats that are owned jointly by Coombeswood Canal Trust (CCT) and the BCN Society. They are kept at Coombeswood, and taken care of by a group of members from both groups.

You can get onto these boats!

We welcome more volunteers to help with these boats. We welcome helmsmen, help with maintenance, and crew  to help with locks and general duties with moving the boats and helping with general maintenance jobs.  If you don’t have experience, we will train you.

Imagine the feeling you would get helping with 140 ft of boat along the canals or rivers of the system.  Give it a try, even just once!  You never know you might get hooked!! 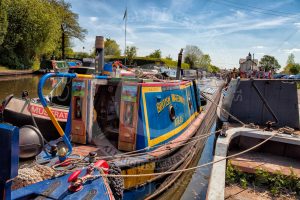 Ex-British Waterways working boat “Atlas” at the finish of the BCN Marathon Challenge at Longwood Junction on the Daw End Branch.

Can you help us show off these wonderful boats to the rest of the world?

If you are interested in historic boats and the canal system, but don’t want to get involved in the boat handling, then join us at the festivals and rallies around the West Midlands to meet the public. 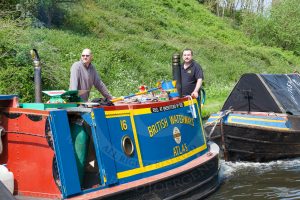 This could be YOU!

It can take as much or as little of your time as you like.   All we ask of volunteers is to to turn up when you say you will.

To help on the boats, you must be a member of either the BCNS or Coombeswood Canal Trust. 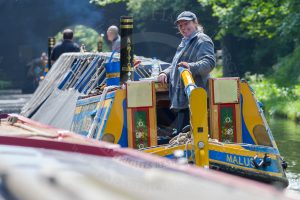 The history of our boats

She was one of 18 pairs ordered in 1935 by the Grand Union Canal Carrying Co.
She was built by Harland and Wolff, of composite construction, (that is iron sides and an elm bottom), powered by a 2DM engine (number 46325) made by the National Oil Engine Company at Ashton under Lyme.

On entering service the GUCCC gave her the fleet number 16 which she still carries.

During the war years 10 pairs of Star Class boats were steered by all women crews later know as “Idle women“because of the the initials of the Inland Waterways on the National Service badges they wore.
A pairing list of the 14th September 1944 shows Atlas paired with butty “Capella”, steered by one of the “Idle Women” Frankie C Martin.

After nationalisation she became part of the Docks and Inland Waterways Executive, South Eastern Division.  Pairing lists in 1958 and 1960 show her paired with butty “Draco”.  She has also been paired with “Leo“.

After carrying stopped she was transferred to the maintenance fleet in the Birmingham and Midlands area until being passed (with Malus) into the British Waterways Heritage Working Boat fleet in the early 1990s.

Atlas and Malus were initially leased from British Waterways to the BCNS and CCT, and later we later purchased them.

is a small Northwich butty boat, originally of composite construction, built by W J Yarwoods and Sons of Northwich in September 1935 for the Grand Union Canal Carrying Company as part of the same expansion programme as Atlas.

Delivered on the 4th October 1935 to the GUCCC and given fleet number 307, and paired with “Scorpio.”  She was gauged on the Grand Union on the 24th October 1936 and given the gauging number 12412.  She was used for carriage of cargoes such as coal, steel, timber and grain from London to the Midlands area.

Pairing lists in 1944 shows her as being with “Areas”.

After nationalisation she became part of the Docks and Inland Waterways Executive, South Eastern Division. Paired with “Owl” number 230 in 1958 and “Saltaire” in 1960.

She was restored as an example of a working boat of the 1950s in which two adults and up to two or more children would have lived.   The cabin is open for viewing.