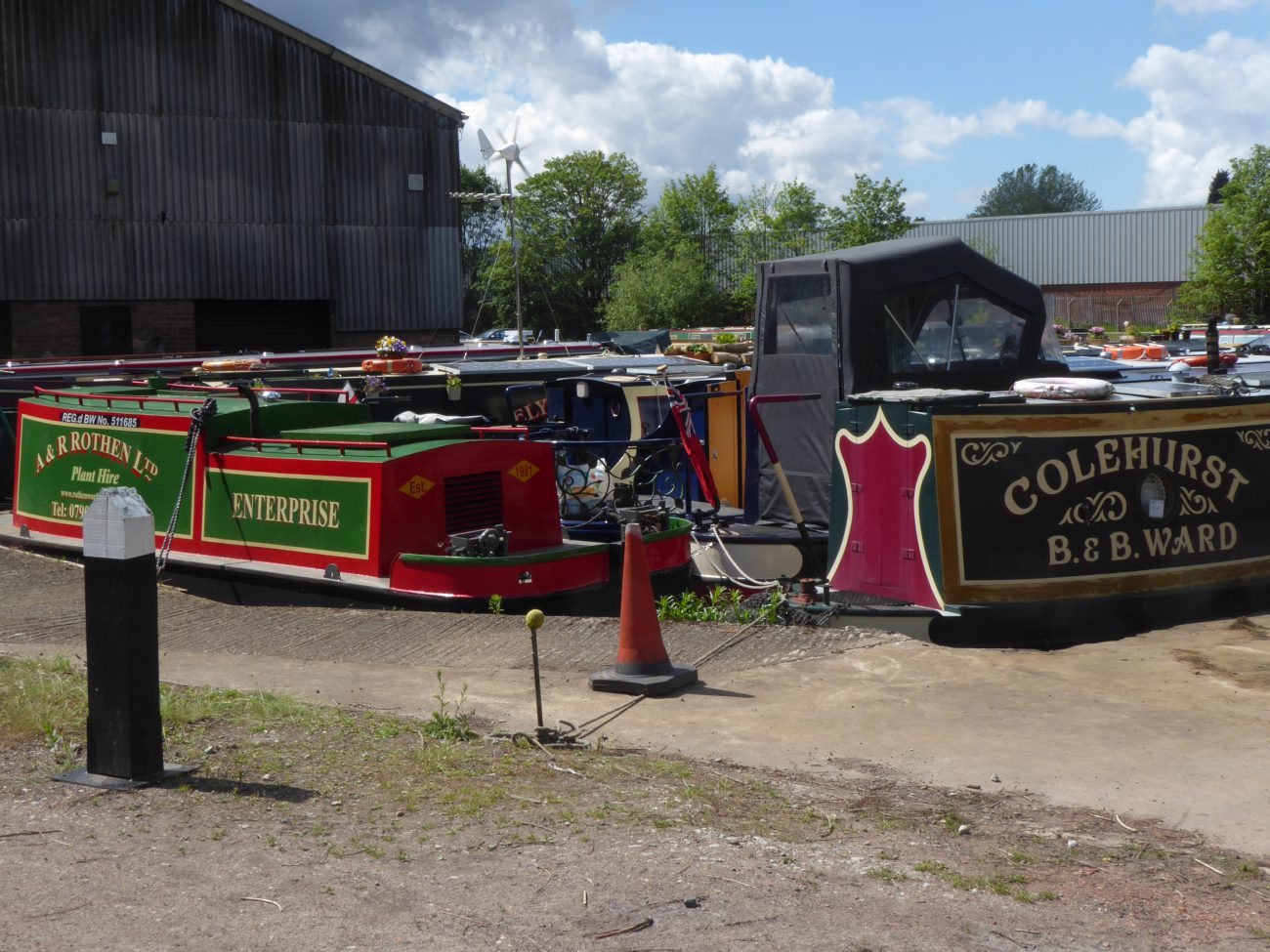 Some said it was madness. Others warned of spending a week in the weed hatch – or worse. But my recent experience of a Birmingham Canals Society Explorer Cruise actually resulted in one of the most enjoyable weeks I have had for some time.

Yes, time was spent in the weed hatch for everyone – in my case picking up a padded jacket surrounded by electrical earth wire less than an hour into the cruise. But the satisfaction of travelling with 19 other narrowboats, crewed by experienced like minded people, under quite challenging conditions, is a worthwhile experience for anyone who cherishes our Cinderella waterways.

DAY 1.     The convoy set off from the top of the Wolverhampton 21 locks after a briefing and pub gathering the night before. Seven hours of cruising, with no locks, saw us moored at the top of the Cannock Extension branch, an attractive stretch of water complete with wild orchids along the towpath.
We moored opposite the basins which served Grove Colliery, ever mindful of the fact that 14 miners lost their lives when an explosion ripped through the mine in 1930. It closed in 1950 and nature has taken over.

DAY 2.   All crews met for a meal at a nearby hostelry last night before setting off on an eight-hour, lock-free day which took us to the end of the Cannock Extension – a destination that has long been on my places-to-go list.
This branch runs through beautiful countryside and ends with a bonus in the form of Chasewater reservoir, constructed as a feeder for the BCN.

Rusting coal chutes near the basin are a reminder of why the canal was originally built. A couple of hours later we arrived at Longwood Boat Club on the Rushall Canal whose members were there to greet the “explorers” and open their club house for a fish and chips supper followed by a quiz geared up to canals.

DAY 3.  No one was going anywhere. We awoke to find the mile long pound below Rushall top locks almost empty. After letting water through for some time it was decided to let the shallow draughted boats go first followed by the rest of the flotilla. The next seven locks were manned by BCNS volunteers so we were soon turning right onto the Tame Valley Canal.

Another right turn took us on to the Walsall Canal – by far the worst we experienced in terms of rubbish. Everyone struggled but eventually made it to Walsall Basin – a surprisingly attractive oasis in the middle of a neglected canal.

DAY 4.    BCNS volunteers were out again to assist us on the eight lock flight back to the Wyrley and Essington Canal where a meal had been arranged at a canal side pub in Wednesfield.

DAY 5.  The pub, the Nickelodeon, threw its doors open for us in the morning for a talk by Phil Bateman, Wolverhampton City councillor for Wednesfield North ward who is passionate about the canal running through his patch. Joining the Main Line almost where we started the boats travelled to Deepfields Junction and on to the CRT Bradley workshops, mooring in their basin for individual barbecues.

DAY 6.   A welcome and talk by workshops team leader Dave Constable was followed by a tour of the workshops where lock gates are made. Afterwards Dave Pearson took boaters on a walk along the line of the old canal before we moved on to Tipton for the evening and a pre-arranged meal in the famous Pie Factory.

DAY 7.  Friday began with a talk and slide show by Phil Wild in Tipton Library – showing how the area was once an island surrounded by canals. Today’s cruising was the shortest of the week but we experienced a torrential downpour all the way. Even in these conditions the BCN volunteers were willing to give up their time to help us through the last six locks to their headquarters at Titford Pump House where Black Country entertainment was provided for the evening.

Why a six-lock canal that goes nowhere was built in the first place only becomes apparent when studying old maps of the area – it once served around a dozen collieries. The canal is also noted for the Titford Pools. These were constructed as feeders and a number of narrowboats ventured into the shallow waters on the Saturday morning to gain a BCNS Titford Pools plaque. Afterwards all the boats went their separate ways.

The whole week was expertly organised, with great attention to detail, by BCNS member Brenda Ward who with her husband Brian joined the cruise on their narrowboat Colehurst. The society has been organising Explorer cruises since 2007 and if Brenda’s efforts are anything to go by they now have it off to a fine art.

The week was an opportunity for like-minded boaters to experience something new while bringing a spark of life into some little-used canals, some of which are surprisingly beautiful. The forging of new friendships was an added bonus.

So anyone who wants to “explore” the far reaches of the BCN on the society’s cruises get your name down for the next available week. You will not be disappointed.